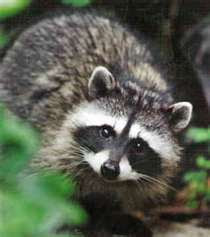 Cute, huh?  I mean, what an irresistible little face and appealing expression.

Yeah...except when you've got one down your chimney!

Hubby was up on the roof this morning after breakfast with a flashlight to see if he could determine what was trapped in our chimney.  We'd heard little squeaks and noises last night in the fireplace behind the insert, but couldn't do anything about it--and we thought it was a bird or a squirrel.  But a raccoon?!  Groan.  And it wasn't little.

He hung a rope down the length of the chimney (two stories high) and called animal control.  Believe it or not, they said these critters don't generally fall down chimneys, they hide out deliberately and can get out just fine.  But just in case they don't, drop an ammonia-soaked rag down there and they'll hustle up and out pretty quick.

Knowing they're nocturnal, we decided to wait until this evening.  SweetPea accompanied her dad up on the roof (homeschooler field trip, you know) to see if the cute little thing was still there.  Yup, it was.  So to force the issue, the dad poured some ammonia down one side, insuring a healthy dose of noxious fumes to get the job done. 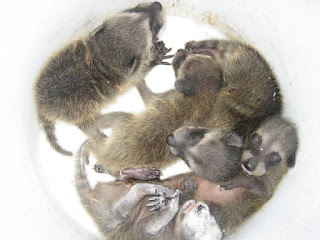 Double groan!  She sure enough had a Purpose for hiding out in our fireplace. (Photos not mine but you get the idea.)

Hubby feels bad about the ammonia...but maybe it'll expedite matters.  Hopefully, Mama will find it too inhospitable and move her family quickly to better digs.  And I really hope it was intentional on her part to get down our chimney, because if not, then I'll be writing part two of this adventure. Enough is enough!