Someone is watching you 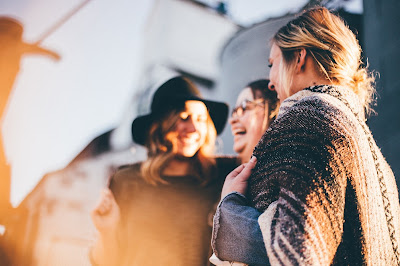 As we settled ourselves in the church pew that Sunday morning, the faces around me mirrored the barely controlled emotions and teary eyes I was struggling with. The unbelievable had happened: Kim, the pastor's daughter—our worship leader and my dear friend—had suddenly passed away the previous Wednesday, leaving behind a loving husband and five school-aged children. She had overcome cancer earlier, but we did not know it had recurred.

Here we were only four days out from her passing, and there was her father, Pastor Jack, quietly greeting everyone at the door with his never-failing gentle smile. His wife, Mary, was there too, hugging us, giving the little children's Bible lesson at the beginning of service as though their lives had not just been cleaved in two.

How do they do it? I wondered. This was not just a brave show of emotional control. They were truly at peace. In their rawest moment, the bedrock of their faith in Jesus Christ held them strong. They knew where Kim was. They had work to do, people who needed them. The imponderables of this devastating loss were left in God's hands. Their wounded hearts were obviously not the primary thing, the Kingdom was.

That's what I saw. It was stunning and deeply affecting to me. When grief had visited my doorstep in past years, I pulled in, closed off, and wrestled with God. It had taken me many long months to come to peace and renewed trust, and with a later perspective I wondered why I had struggled so. It seemed a discredit somehow to my Lord and His love for me.

I watched them through the following difficult months as they closed ranks and carried on. Mary picked up the kids’ homeschooling with another friend, and the many ministry hats Kim had worn settled on other heads. Each day brought fresh challenges in lives that were reshaped by such a loss. Yet, in all that time, I never heard a word of complaint. Rather, Mary’s cheerful and loving smile continued to greet us, and she met the daily challenges with unflagging courage and faith.

I cannot overstate the impact that experience had on my life. God allowed me to see up close what Christian faith looks like under fire. When I saw how Mary trusted the Lord through that deep time of loss, and kept on doing the right thing in worship and trust and love for the Lord, it became a reference point to me: how could I do any less in my own difficulties? Her example became my new benchmark of faith. I asked the Lord to help me walk out my own trials with similar grace, that I too could be a help and not a hindrance to someone else's faith.

We never know who is watching us. They see how we handle crises, if what we say we believe agrees with what they see. What I saw in Jack and Mary’s lives was the quiet, unshakable faith that had come through a lifetime of knowing Jesus. Theirs was a Kingdom view that not only helped keep them steady, but set an incredible example for those of us who watched.

(Photo by Priscilla Dupreez on Unsplash )